Argyll Property Partners was delighted to put on a joint panel event on Wednesday 16 October with law firm Gunnercooke titled ‘The future of property development for SME developers in the Midlands, North and North West’. 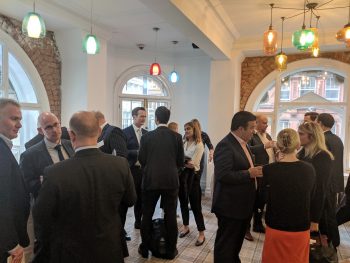 The event was hosted by Gunnercooke in their Manchester office and attended by developers, lawyers, surveyors, bankers and others involved in the property sector in the North West.

The panel of property experts comprised:

The current state of the market

David started by asking William to summarise the current state of the residential development market in Manchester and the North West, and how this compared to other regions in the UK, excluding London and the South East.

William said the market is fairly strong across the North West. Growth in the residential market in most areas has been between around 15% and 25% over the past five years and levels are now well above their 2007 peak, although the last 12 months have been relatively static. The largest growth has been seen in Manchester city centre and there are now over 14,000 apartments under construction, which are due to complete this year or over the next two or three years.

Savills’ prediction over the next five years is 14.8% growth across the UK as a whole with the North West forecast as the highest growth area in the country at 21.6%. This is the first time the North West, North, North East and Wales have higher predicted growth than London and the South East. London’s growth is predicted to be 4.5% in that period.

Stuart reiterated this by saying that in terms of construction and new starts the biggest growth has been from Birmingham upwards and Manchester in particular. He said he has noticed that London-based lenders are now setting up regional hubs. In addition, the average build size has been increasing over the last few years from around £2m to £5m or £10m plus. In brief, there is now more activity in the North West and it’s of a higher quality.

Matt said there is a huge amount of lending available for developers in the market and previously less viable schemes will now get funding.

William pointed out that the land market is slightly different to the residential market and values haven’t quite kept up due to factors such as construction costs and planning requirements. Although some areas have seen significant growth, in others it has been fairly flat

Challenges and opportunities for SMEs

David then asked the panel what challenges and opportunities SME developers face in the North West with reference to larger developers and landbanking, planning issues, the private rented sector and government schemes.

Matt said an important issue is infrastructure. When he is looking at a site’s viability it is vital to look at how good the public transport is and the availability of schools, GPs, dentists, shops and other amenities.

Stuart said an industry-wide problem is the stretch on contractors. Their cash flow tends to be poor and their balance sheets weak, especially the smaller ones. He is seeing lots of examples of main and sub-contractors failing. This can cause costs to shoot up and is especially a concern on bigger projects such as PRS and student developments as it can push back receipt of rental income.

William said he feels the planning system is a big issue as the process is so slow and it can take developers so long, sometimes up to 21 months or more, to get on site.

Interest rates and the availability of funds

David asked the panel to discuss the availability of funds and interest rates.

Matt said low interest rates and the volatility of the stock market has meant people have been looking at other assets and this has led to money pouring into the property lending market. Some lenders will lend 65% and more and as long as that money is coming in there will be downward pressure on rates.

Paul spoke about the source of funding for lending institutions. He feels the crowdfunding model is proving to be built on shaky foundations and has left a lot of developers high and dry on monthly construction drawdowns. He referred to the fact that Argyll is self-funded, which is an advantage to developers borrowing mezzanine funds from Argyll compared to other lenders in the same space.

Paul thinks that for global reasons and the fact central banks do not have the same tools available anymore to leverage changes to the economy, interest rates will remain low in the short and medium term.

The next question was about new trends in the residential market. This sparked a lively discussion between the panel and members of the audience about modular construction. This is an issue we will revisit in more detail in a future blog.

Finally, David asked what advice the panel would give developers.

Stuart said to check that their construction contracts are watertight, that their contractors are competent and solvent, and that their funders understand the market.

Matt advised developers to speak to a lender at an early stage to make sure they can get the development funding they require. Paul suggested that detailed appraisals are very important for lenders as are CVs of the developers so that lenders can see what they have done in the past.

Will concluded by saying developers should ensure the layout, design and specification is appropriate for the market and location as that is key to achieving values and sales rates.

Thank you to Gunnercooke for hosting what proved to be a fascinating the event, followed by excellent networking opportunities.

Thanks also to the panellists for taking part, David for leading the discussion and all the attendees. We are hoping to put together another event with Gunnercooke in the New Year and will announce details as and when this is firmed up. 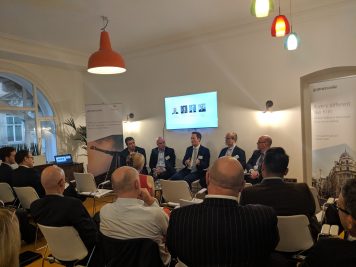 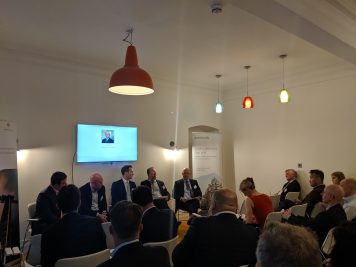 Paul Markovitz interviewed by Showhome magazine
Next Post: What will the end of Help to Buy mean for smaller developers?